An identity of character 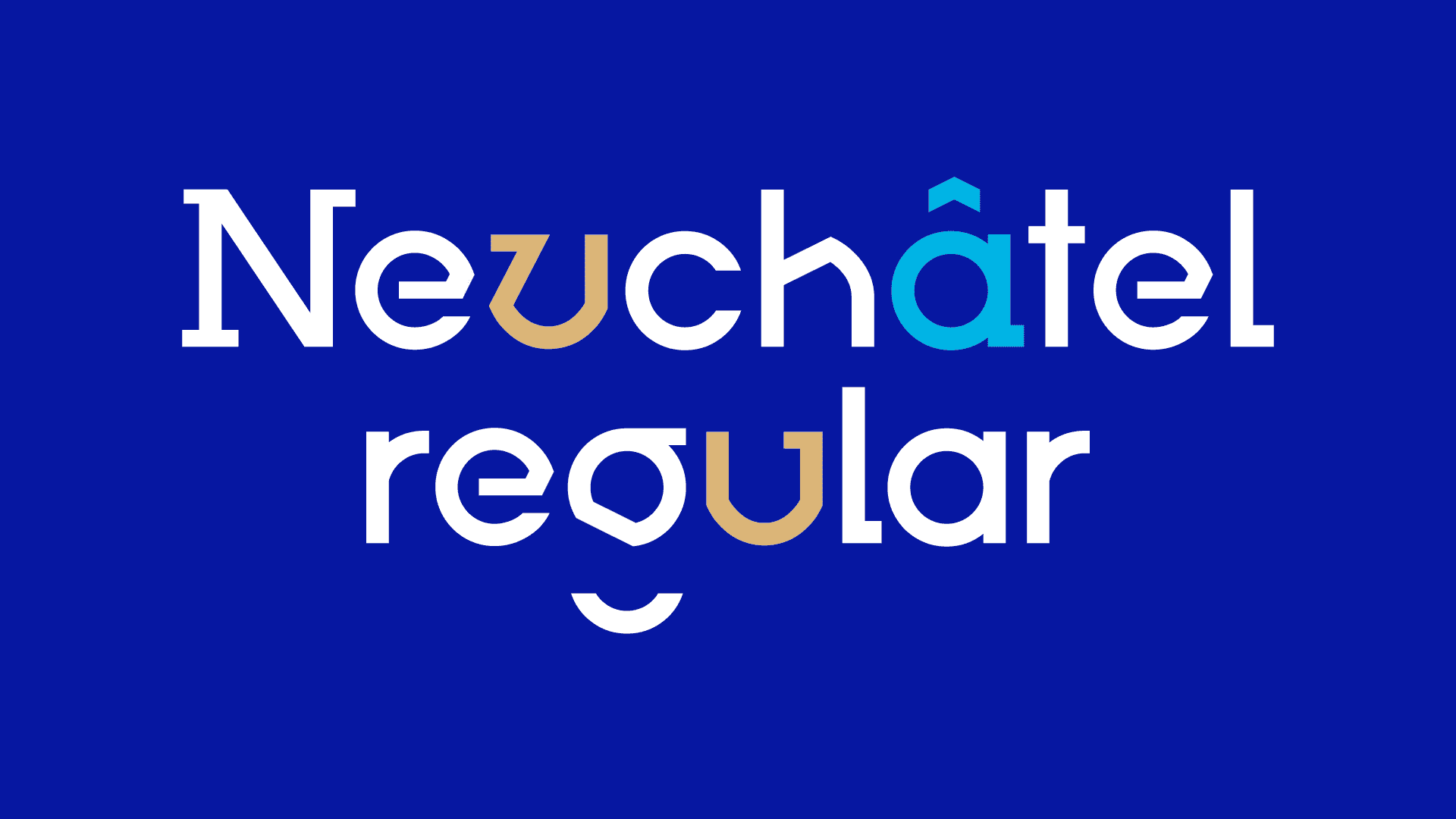 Would you like to give your texts a touch of the Neuchâtel accent? Why not write them in “Neuchatel Regular”, a font that we’ve just created, inspired by typically Neuchâtelois architectural symbols.

This creative endeavour is the result of a call from the City of Neuchâtel’s authorities after the fusion of the canton’s capital with Corcelles-Cormondrèche, Peseux and Valangin. The new political entity – which by the way is now the third largest city in the French-speaking part of Switzerland – was on a quest for a new visual identity and, with that in mind, launched a competition of ideas.

Typographical approach for a logotype

Here at Lemon, we wanted to develop a concept that would stand out from the modern trends that currently define most cities’ visual identities.

For us, what better than a font for logos, titles, or various graphic creations like posters, street signage or even cover pages for reports? By using a typographical approach, we also wanted to pay homage to one of the region’s artistic traditions, embodied, for example, by Jean Mentha, the famous typographer from Neuchâtel.

Our colleague Joëlle is also a typographer, and she’s from Neuchâtel. So naturally, she took charge of giving the “Neuchatel Regular” its local accent. To do so, she sought inspiration in the architecture of the Capital and of her three sister communes.

The quest for common references

As you stroll down the historic streets, certain symbols stand out. We therefore isolated various recurring elements:

The archways that surround entrance doors.

The chevrons and waves which are painted on the shutters of many ancient buildings.

The decorative cornerstones that adorn the winemakers’ houses.

And of course, the yellow stone from Hauterive, the special limestone whose recognisable yellow-ochre colour defines the region.

Sleek and stylised, these elements were integrated into a typographic grid in order to shape the Neuchatel Regular. To make the rendering more modern, the font is composed of both geometric and typed glyphs.

This font is mainly intended for creating titles and texts in large format. It goes well with a simple Helvetica for the body text.

As for the colours, our proposal was to retain three main ones: 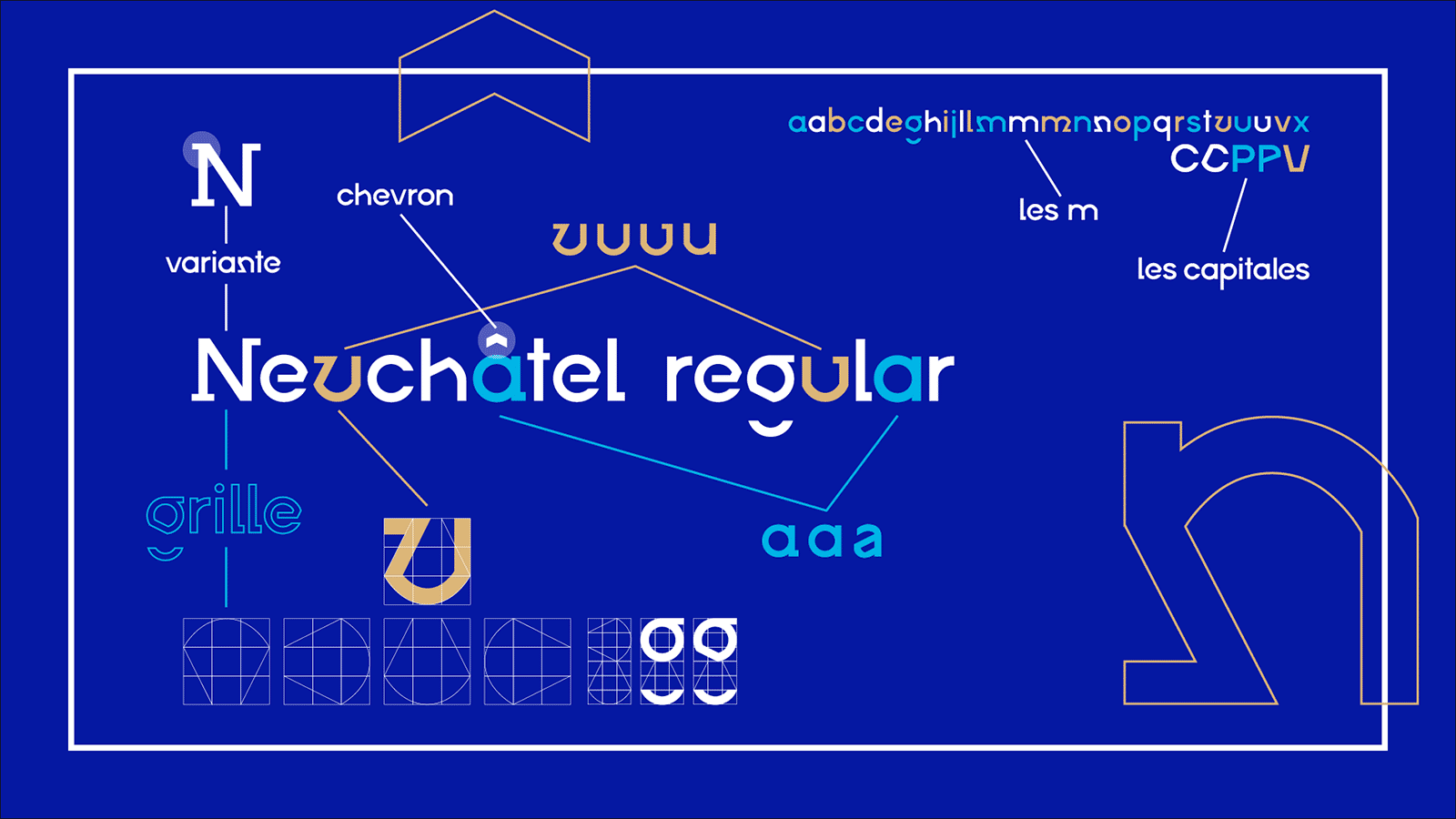 Finally, to support the typography in all its variations, we developed a series of strong symbols, representing the values of the new city of Neuchâtel. They can be used individually, combined, as a frame, or in addition to the logo:

Voilà! We took great pleasure in working on this concept which was particularly close to our hearts, because we love our city. We also love to take up this kind of challenge, and endeavouring to provide original and innovative solutions.

In the end, our project was not retained. They said it was close! For us, the exercise was a success. We’re proud of the result and we like it. So, we’re going to use it for something else. To find out what, stay tuned. We guarantee that the “Neuchatel Regular” won’t lie forgotten at the bottom of a drawer.

View the project on Behance

Back to the blog